It dawned on me last month that I have a third grader!  You see, when I taught classical music classes at Deo Preparatory School, one of my favorite cycles to teach was with the third graders—Handel’s Messiah.  All creativity was unleashed in the classroom in order to enliven the meaning of each scripture, introduce children to a man who lived long ago in such a way that it was like they were meeting him personally, hearing such musical vibrations to ears that had never known those sounds… I wanted them to “see” the imagery Handel painted with musical notes—imagery depicting every word being sung.  I just loved it!  So, J. Michael is my third grader now, and such love and creativity was unleashed right in our own living room!  Over the past few weeks, we have been spending time each day learning all about George Frideric Handel and perhaps his most memorable work. 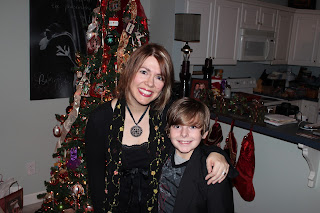 J. Michael loves to dress up for special occasions and thus was delighted to wear his suit-coat. 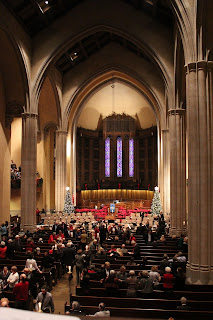 We went to dinner, followed by the Winston-Salem Symphony performance, taking our place early in the center front row of the balcony.  Surrounded by beautiful architecture, we were by far the youngest in the crowd… certainly he more than I, but still—the majority of men and women in the room were a few decades my senior. 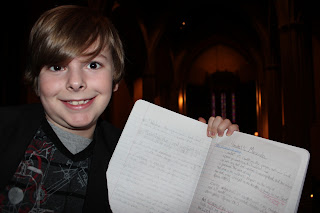 We read along, using the copywork notebook that J. Michael proudly carried with him.  It was complete with the passages of King James Bible text, written line-by-line with the right hand of my eight-year-old.  Alongside and within each verse were color-codes—underlines in red representing Christ/redemption, in purple representing people telling others of the news, in black representing sin/darkness, in orange representing refiner’s fire/intensity, and in yellow representing God’s glory and future hope for all who come to know this Messiah.
I noticed throughout the performance that J. Michael sat entirely on the edge of his seat, occasionally glancing at me with excitement when a certain word or message was being sung.  Part One was coming to a close at the hour mark, and this eight-year-old was disappointed, asking why it was going by so fast!  At the same time, we heard the two older couples talking in the row behind us.  One man said to the other, “Is the next section going to be as long as the first?  I just may pull out my Angry Birds, and then you’ll be jealous.”  J. Michael looked at me, perplexed.  I said quietly, “I think they are here tonight because their wives wanted to come.”  To which he still just stared at me with disbelief.

Part Two began, and as we heard sung of the suffering and the resurrection of Christ, we clung to every note.  He snuggled in and I could feel his heart beating.  I found myself glancing around the room, just wishing that every single attendee would have had a preparation course on how beautiful this message is that was filling the room.  I felt like we were sitting in our own little world, just the two of us.
Beside us sat a family that had two teenagers who, based on their body language, had no eagerness to be attending this oratorio, teenagers who were most probably fulfilling an obligation to mom.  Again, I thought to myself, “If only they understood the power of this message, this personal message.”
Part Two escalated into the Hallelujah Chorus, leaving my son breathless.  There was a five-minute Pause before the third and final section.  I could feel around me, people who wondered why we weren’t leaving after the Hallelujah Chorus was sung… Yet J. Michael and I had studied the verses found in Part Three, and to a believer, we sat with hearts full, hearing, “I know that my Redeemer liveth, and that He shall stand at the latter day upon the earth…”  I did whisper a few times in J. Michael’s ear, making sure he understood words like “the dead shall be raised incorruptible.”  He sat up tall, beaming through to the final “Amen.” 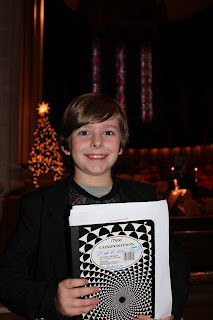 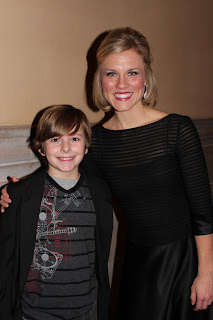 Because we are rarely in an historic church building, I took J. Michael to the front to take a picture and we were able to meet and talk with our new friend, Jessica Cates.  She was the soprano soloist of the night, and she was quite taken with J. Michael’s enthusiasm.  We told her how we have been studying this oratorio and opened his notebook to show her the pages and the colored symbols and doodles he had drawn.
Her jaw dropped to the floor and quickly turned into an excited smile.  “J. Michael!  I do believe that YOU probably understood the nature of this work better than anyone who attended here tonight!”
She went on to say, “Unfortunately, we are losing our audience.  People don’t attend performances like this as they used to… because people just are not teaching it.  Thank you so much for coming tonight, J. Michael!  This was my first Messiah, and it was an honor to share it with you.”
That resonated in my bones, and I’ve heard the echoes, “We are losing our audience.”
There’s a place for tradition; there’s a place for brand new.  I just hope that families are creating a place in the home to be learning the message of Messiah.  We are losing our audience if we don’t.  And I am not referring to a piece of music.  I am referring to a piece of work.  The you and me piece of work.  Workmanship.  Soul Artistry.

I will leave you with the final scripture sung during Messiah.  Oh, that everyone in that room were walking in the knowledge that we have been given all of this by an Almighty God Who is patiently at work within every heart that has made Him room:

Worthy is the Lamb that was slain, and hath redeemed us to God by His blood, to receive power, and riches, and wisdom, and strength, and honour, and glory, and blessing.  Blessing and honour, glory and power, be unto Him that sitteth upon the throne, and unto the Lamb, forever and ever.  Amen.  (Revelation 5:12-13)

Time for T
An Early Morning Moment, A Barbie Townhouse and A Basketball for Ant